The app was developed to test a hypothesis where the primary content was designed to encourage reading engagement, utilising the Hook Model to form a new habit in users that increases their reading engagement.
Through an intensive research project, using a mixed methods approach, with consideration for accessibility towards understanding obstacles facing literacy engagement among differing literacy levels within modern society, it was discovered that those with poor literacy revealed regular engagement with social media and messaging through digital devices.
With new knowledge gathered through qualitative and quantitative research methods such as surveys and interviews it was possible to create this problem statement that fits within the realm of a UX researcher.

To help create a sense of empathy several personas were created, as models of the people that it is believed require the problem to be solved. 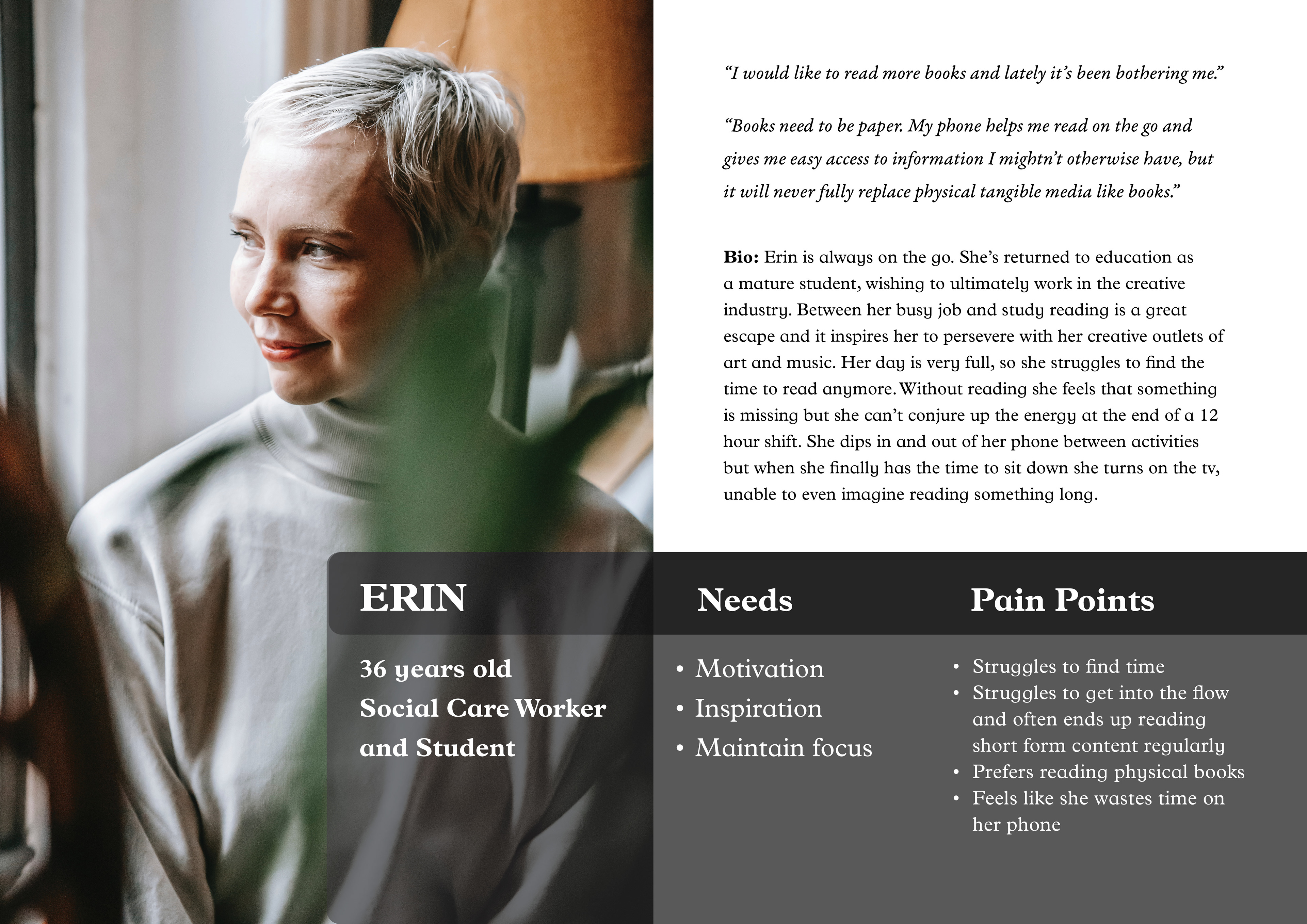 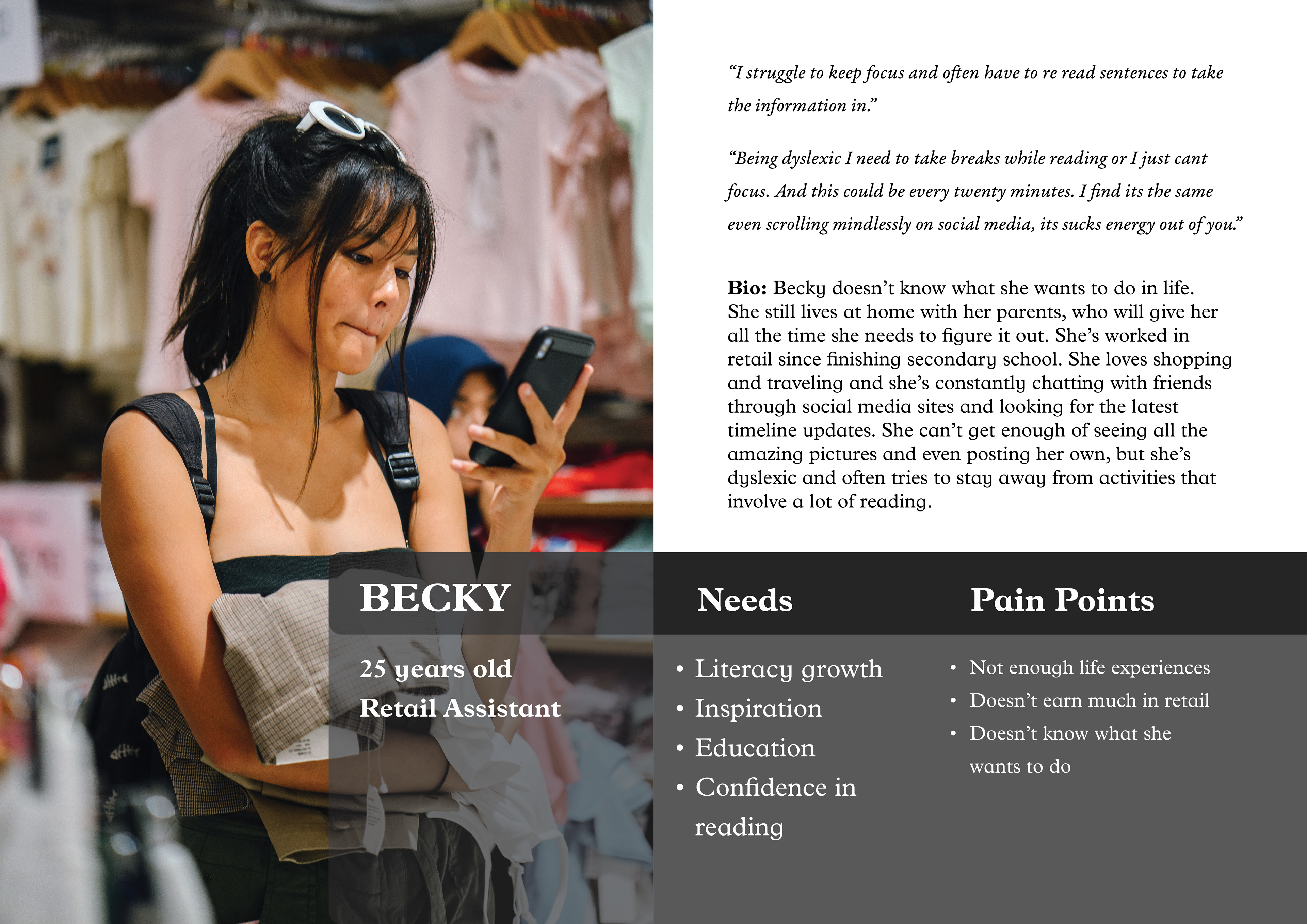 These personas revealed the scope of the audience and they remained as a constant reminder of such throughout the development of the project.
By combining findings gathered during the early research phases, it was possible to refine assumptions posed within the problem statement into a testable hypothesis.
Feature prioritisation was then used to aid in identifying study goals, using a matrix for weighing value of proposed features, scoring priority and developing a roadmap. To facilitate this activity users were represented by personas, and an experienced developer was consulted about technical feasibility.

A task flow diagram was a used to identify various paths or processes a user may take whilst navigating the app. This was used in conjunction with personas, assisting with design for specific personal mental models.
Potential avenues for exploration were ideated through paper prototyping. These sketches were evaluated against the personas and feedback was sought from potential real-world users. 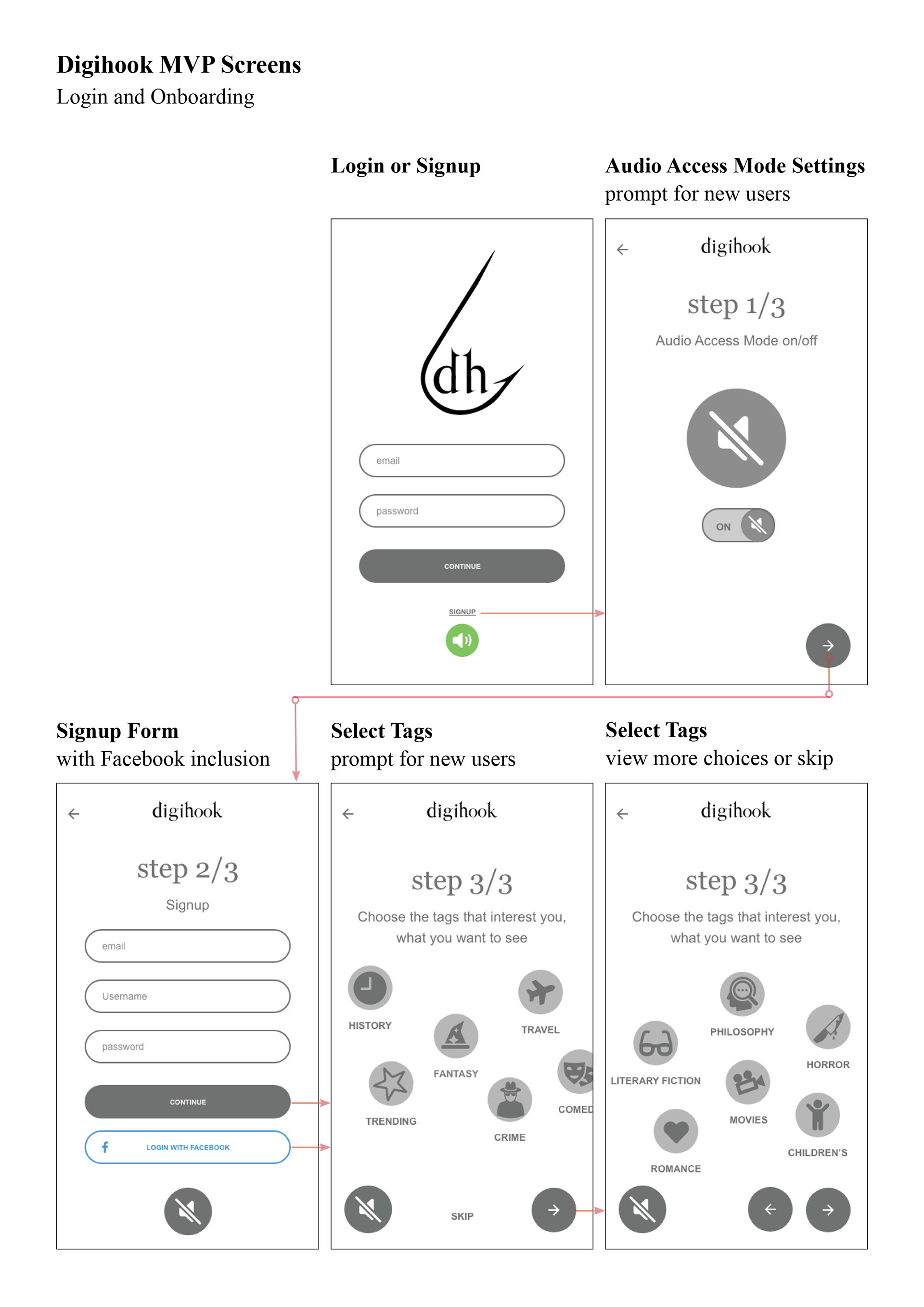 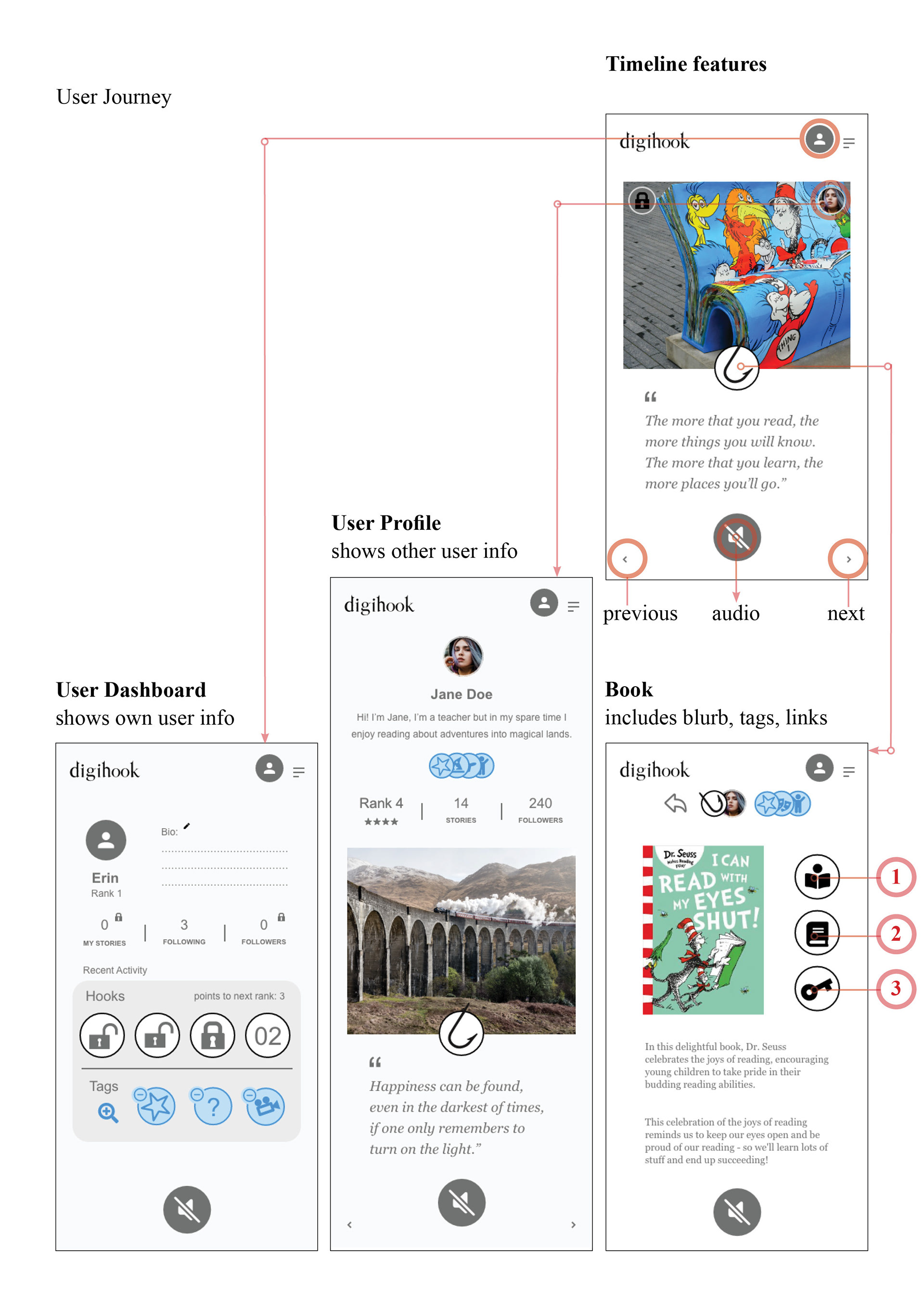 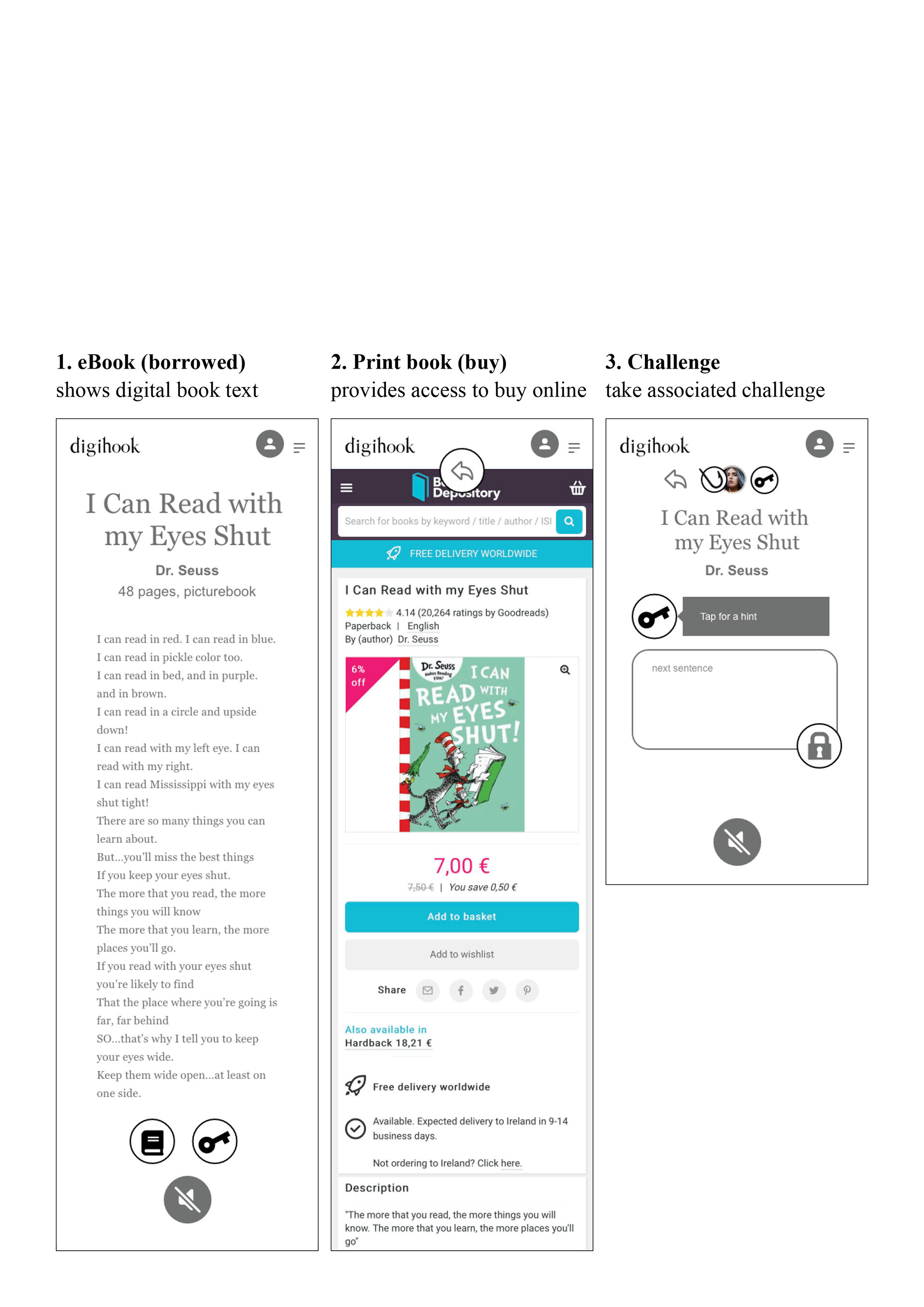 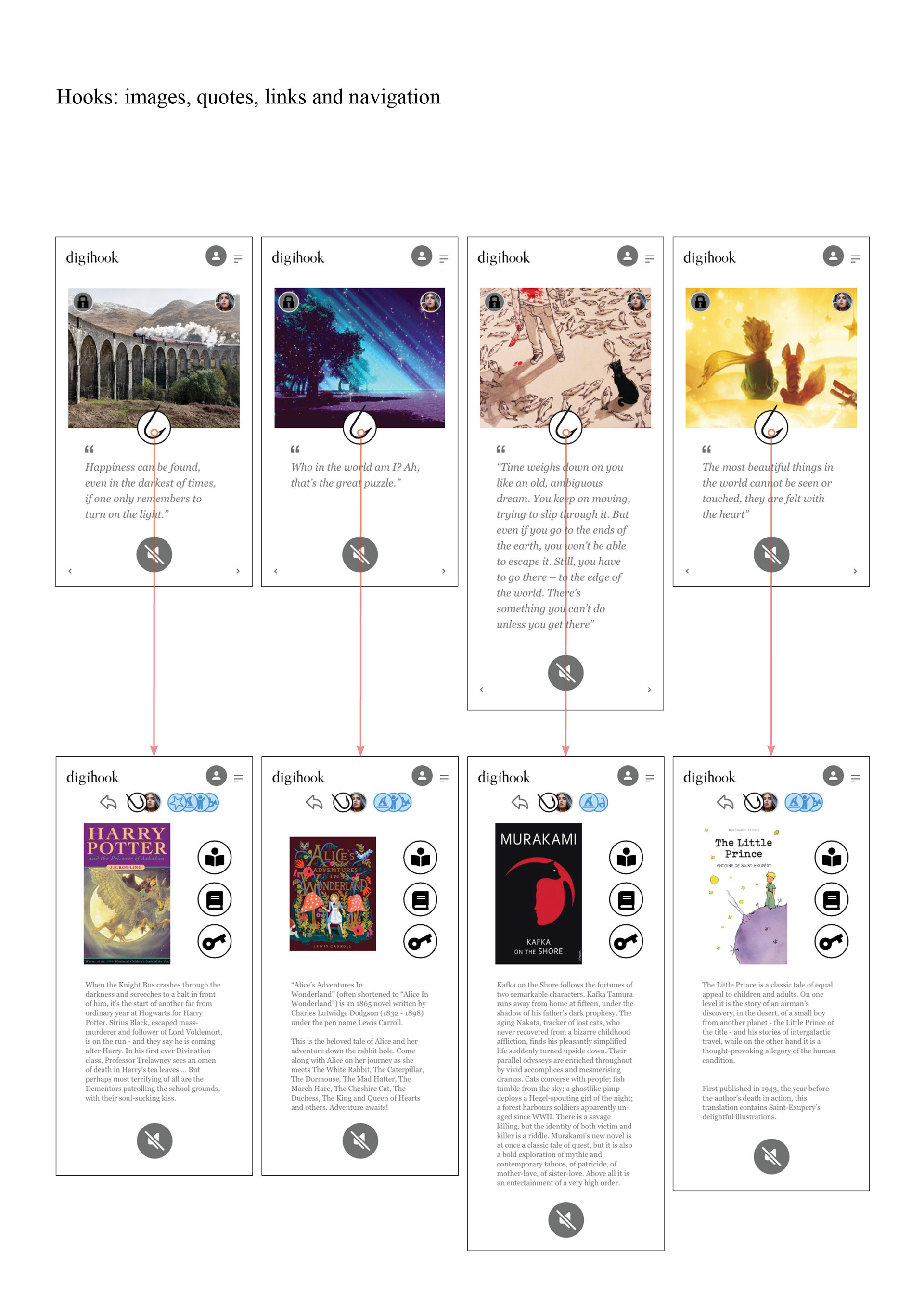 The hypothesis was tested through 2 user studies. The initial testing phase examined functionality and success of an MVP before developing the prototype further. 3 participants were invited to test at this stage. Among the selected participants 2 were female and 1 male, with similar reading profiles to the previously developed personas.
The prototype then required a number of enhancements in its next iteration. A core necessity for inclusion was additional onboarding content to address functionality of key activities. More consideration was also required in selecting iconography.
Testers reacted positively to the core concept of the artefact and voiced positive feedback conditional to improvements in design and usability. Furthermore, whilst testers were unable to use audio as designed within the prototype, the inclusion of audio functionality was viewed as intriguing and considered theoretically accessible, irrespective of reading comprehension levels. Testers were not dissuaded by content aimed at lower reader levels as these texts would be quicker to facilitate challenge completion and increase score. 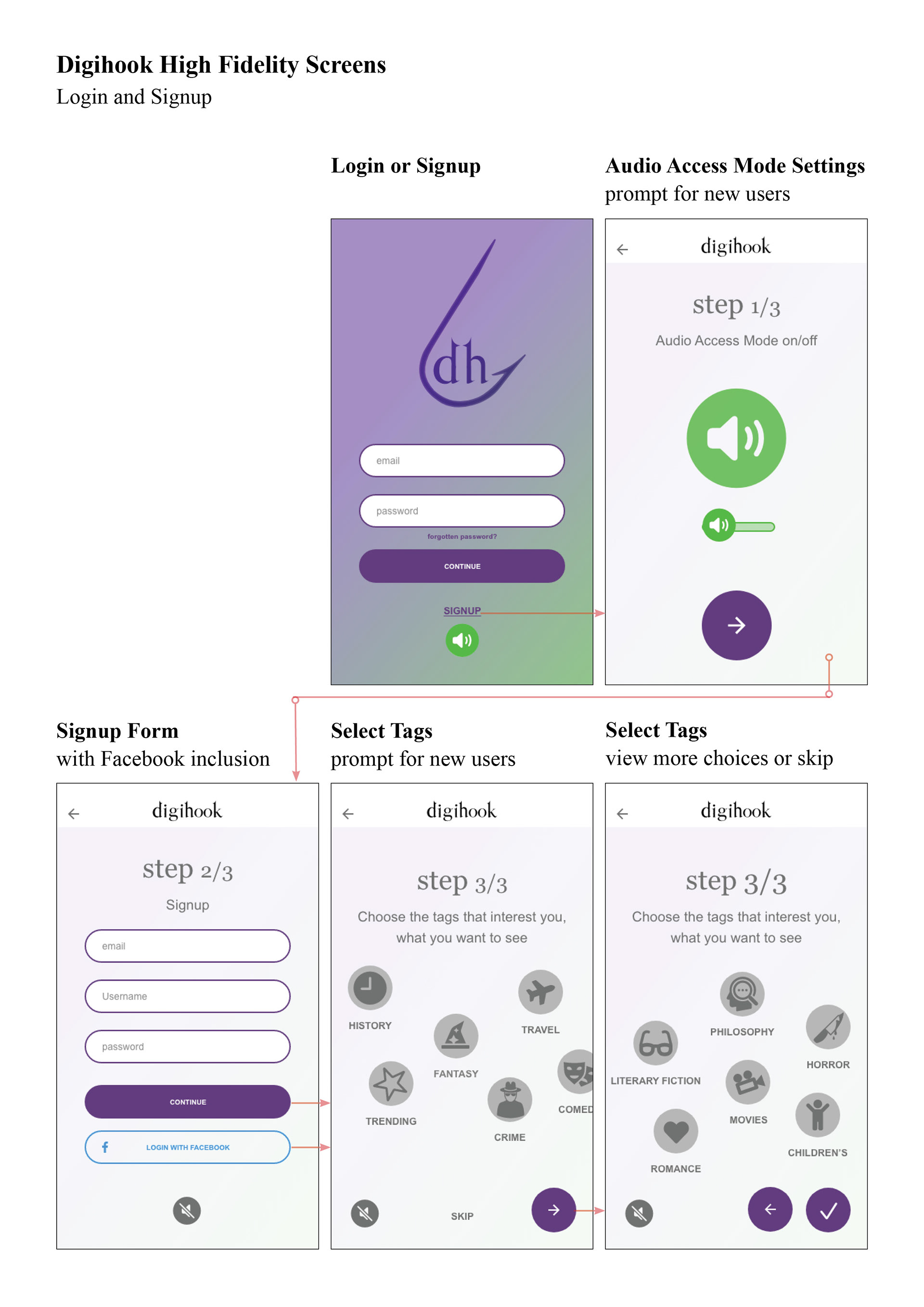 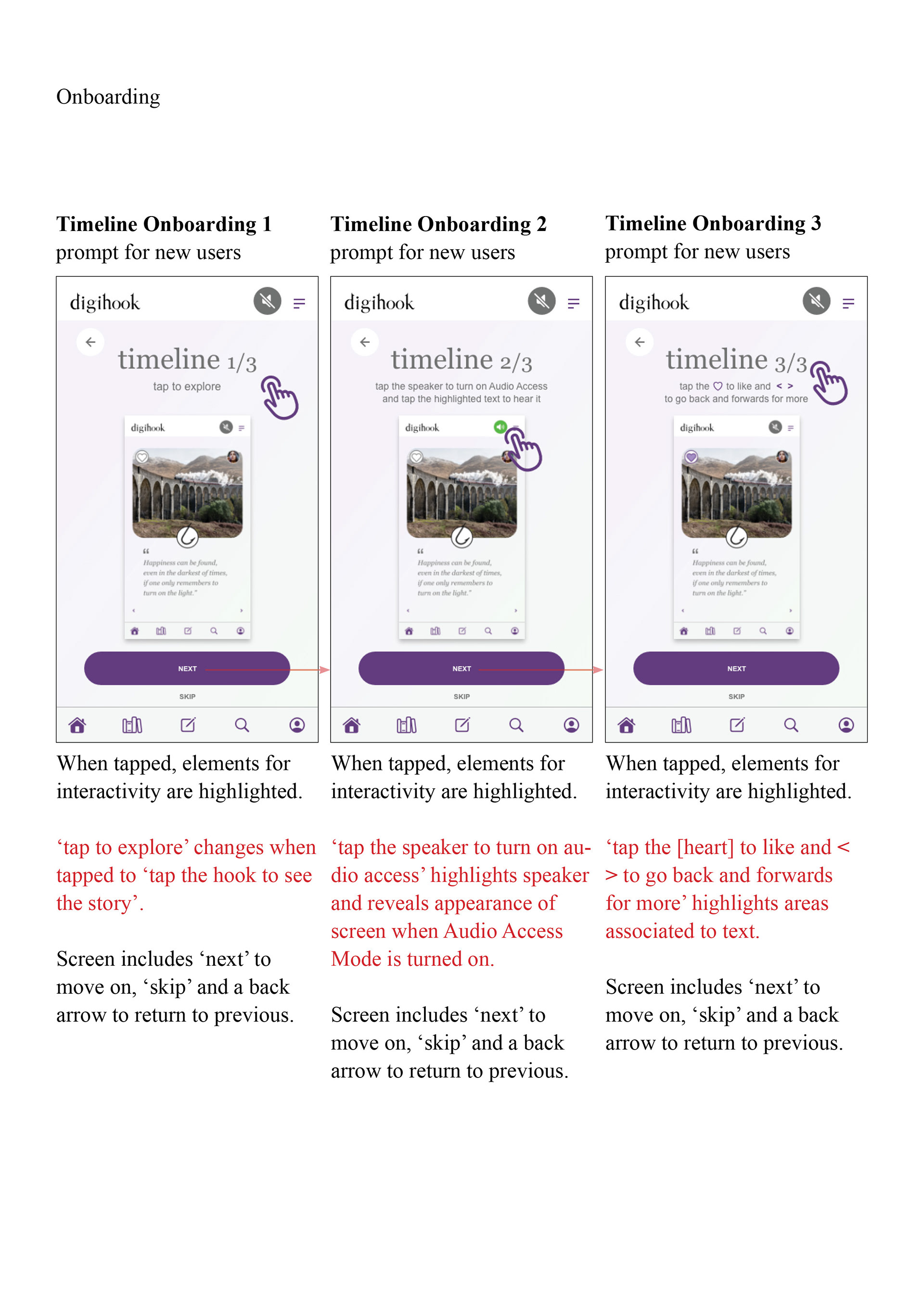 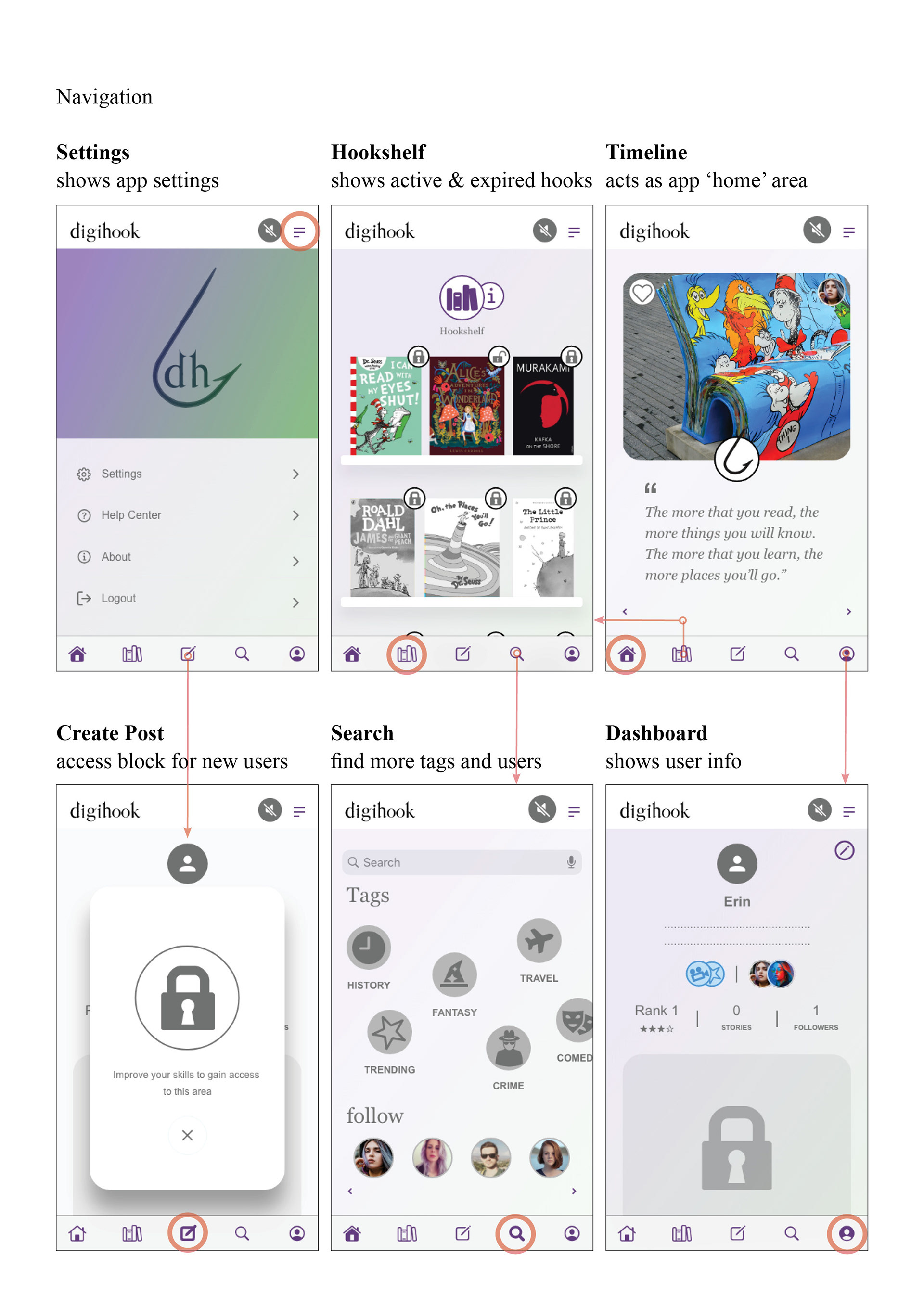 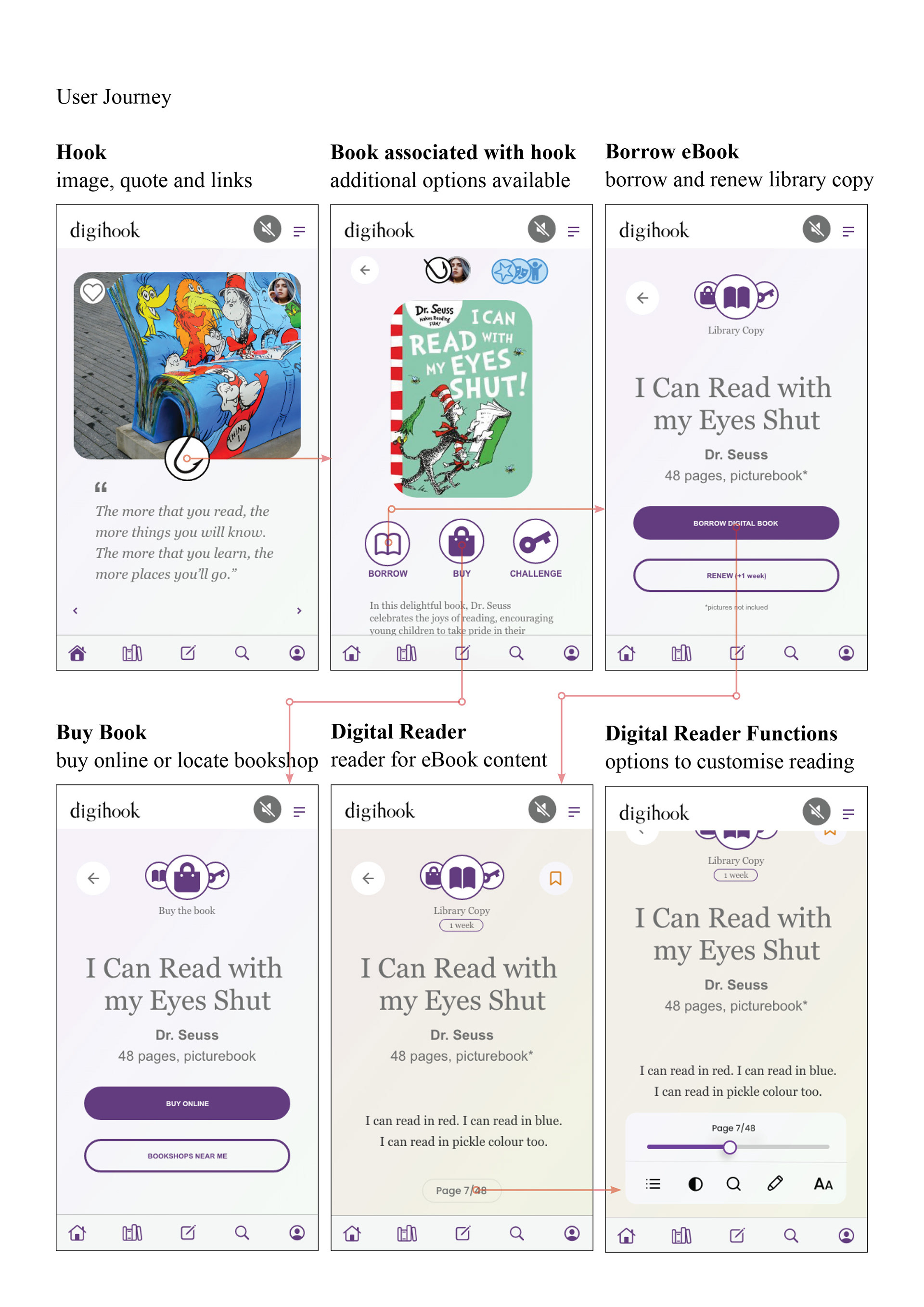 The results revealed that such a solution has strong potential to produce higher motivation and increased literacy engagement. Those without documented literacy difficulties were also included in this study and through usability testing it was discovered that interacting with the application was enjoyable to a wide audience and participants saw potential for its integration within their daily lives.
Through using a UX design framework to research and develop a testable solution, building on earlier academic research findings, it was possible to broaden the scope of this research and remain true to the ascertain that context and individuality are key, with the focus being placed on individual users and experiences.
This project began with a problem, which was clarified and an intervention was created and tested. However, whilst positive results were seen, this is only the beginning. The level of complexity surrounding the issues outlined in the accompanying dissertation may warrant further study. To learn more or read the full study please feel free to contact me through the form below.
An interactive high fidelity prototype is available through the link below:   https://xd.adobe.com/view/5d1d445f-7161-42e2-a2ce-ecb9c2f250ff-084e/ ​​​​​​​
Thank you!